You Don't Tug on Supergirl's Cape*

I have worn it through childhood, teen years, dating years, college summers, bonding with my mother, losing my mother. I have clipped it on during careers, young marriage, seasoned [or fiery?] marriage, infertility, tenuous but joyful new motherhood, foster motherhood. Happy motherhood, painful motherhood. Through sisterhood, Dad care, death, friendship, frivolity. It has fit and felt right through failure and success. Through writer's block and writer's reach.

When I slip it over my shoulders, I am transported to an old, unchanged peninsula where lighthouses guide ship captains--as best they can, as that curving coast can be treacherous. Where Thoreau trudges through sand and writes of his sightings and Henry Beston lives a year near the edge of the sea in the Outermost House. A fertile region where shellfish are dug, chowders simmered, clam pies baked. Pink roses bloom, spilling over wood fences. Pine trees sway in storms and whipping winds, struggling to keep hold in shifting soil. And I can swim in a freshwater kettle pond, the endless ocean or the gentler bay.

Thoreau and Beston are gone, but their stories are not. The lighthouses are there, but more as coastal eye candy, storybook legends. Much of the rest is the same.

We were on that sandy hook for less than 48 hours, from 5 p.m. Tuesday, June 26 until exactly 2:48 p.m. Thursday, when Anne Mernin's minivan nosed away, reluctantly, from the Orleans Post Office, where she had mailed a postcard to Emily after we picked up fresh drinks for the road at the Hot Chocolate Sparrow.

It's amazing what you can do in under 48 hours when you travel with Anne Mernin. We booked just two nights because she has a busy work schedule that requires coverage at Toni's Kitchen, the soup kitchen in town, and her Nikki had a beach outing w school friends planned for today [Friday]. And this time, we had our husbands with us in addition to Nikki and Punch, plus wonderful Ryan Mernin, age 23, before he headed back up to Montreal.

Since we were two families and I couldn't bear to clean for hours when staying only two nights at the Wonderstrand house, certainly not up to my brother's standards, we rented a "cabin" through Airbnb. Yay, that meant we could scoot out after emptying the trash, cleaning out the fridge etc. We had a big fire pit, a nice deck with picnic table, a grill and lots of comfy seating indoors and out. I loved the outdoor shower, massaged creamy Caress onto my skin after a walk to the beach and rinsed it off, looking up to the open sky.

No matter the hours, it was 3 separate days if you're an optimist and Cape lover like me. Tuesday involved a 6 p.m. pond dip [and a run for Dan]--and a stop at the little Superette for bacon, eggs, butter, milk, bread, cheese, gallons of water [I prefer bottled water on the Cape], bananas, matches, etc. Dinner at Mac's for all seven of us--clam chowder, linguine with shrimp, fried shrimp plate, fried clam plate, broiled scallops--as the sun set. Then ice cream for some and settling into cabin.

Wednesday was a full day with family breakfast at house; thrift shopping [Anne loves it more than the beach]; Sparrow for coffee drinks; reading; napping; long walk to the beach; standing in surf; barbecue; and sitting by the fire.

Thursday morning was for packing up and then heading back to Wellfleet for breakfast and excellent coffee at the Wicked Oyster; a walk over Uncle Tim's Bridge; and a visit to the Audubon. Dan and Michael also fit in sleuthing in that old orchard behind the Penniman [whale captain's] House but the ancient, crooked apple tree is not bearing fruit this year.

I posted photos, but not my nature notes or Cape Cod sightings. Here goes. 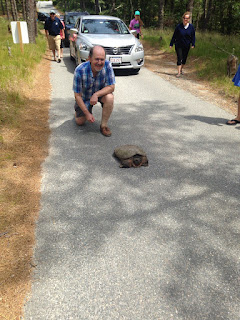 I've loved reporting in but have to get into the shower and do some paid work. Enjoy your day!

*Thank you Jim Croce for this fabulous line from your 1972 hit, "You Don't Mess Around with Jim."