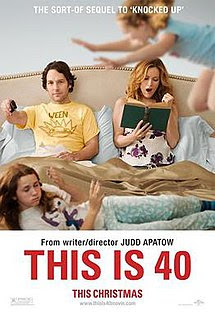 What can I say. I don't like to be catty but I hated this movie. But it was the only one H. and I could agree on tonight. He wanted to see "Django" and I didn't. I wanted "Hyde Park on Hudson," but it's not for him.

"This Is 40" was so L.O.N.G. it felt like I aged in there, and the cursing and bickering was endless. Between husband and wife, young sister and younger sister, young daughter and parents, grown son and his father, even parents at school. I don't think I've ever heard the word F---- that many times. Over and over and over again. It was frustrating.

I love Paul Rudd--loved him in "Clueless" and "Knocked up." But this was more like a meandering TV drama that would/should be spread out over a couple/few weeks. I also love Albert Brooks ["Broadcast News"] and he delivered some great zingers but again, nowhere near enough to sustain a movie this long.

This was a waste of $23 for our two tickets. Unlike the films we've enjoyed lately--"Lincoln," "Silver Linings Playbook," "Perks of Being a Wallflower" and "Hitchcock" [though the last was light for our taste], this was a bust in our book. H. wanted to leave before it was over and started miming needing an oxygen mask, which made me laugh.

I did really like Leslie Mann's style and makeup, though....and hair. So all was not lost. Some good style watching. But sadly, that's about it.

Email ThisBlogThis!Share to TwitterShare to FacebookShare to Pinterest
Labels: movies